Today marks our triumphant return to Paris! After the super busy & ridiculously touristy trip we had in September, we are ready for a more relaxed visit. Don’t get us wrong, we still have a list of sights to see and attractions to visit, but the list is shorter and some of it includes shopping and standing & staring at the Eiffel Tower.

We started our day with a stop at the train station. We mentioned yesterday that we weren’t able to make the reservations we wanted; well we’ve now reworked our itinerary and stopped to get reservations on a different day. Success! Yay!

Stop number two was Notre Dame. We were in the area and had some time to kill, so we took advantage of the fact that it was Sunday and we could slip in for free. While looking online for special Christmas displays around Paris we had found that Notre Dame featured a tree out front and a nativity scene inside. The tree was big and quite nice. It made us smile, although even a Charlie Brown tree would have done that. Our favorite thing about it was how it resembled a Stony Plain tree, aka it leaned slightly to one side. The nativity scene was not what we were expecting. We had ourselves geared up for something large, grand, old and classy. In contrast, it was very bright and full of fake flowers…to be honest it made us think of something that would be set up at an elementary school…kinda disappointing, but we got to see it for free so we can’t complain too much. 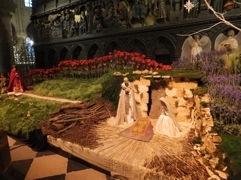 Next we joined a wonderful Sandeman’s New Europe free walking tour. The last time we were in Paris we were still working solely off Rick Steves walking tours and hadn’t yet discovered the amazingness that is Sandeman’s. We didn’t see much that we hadn’t seen last time, but it’s all cool enough that we were happy to see it all again. What we did get though was some fun new stories of the people and places. We also got a chance to see some of the places Christmas-a-fied.

The first story our guide told us was pleasantly gruesome. Have you ever seen Sweeny Todd? It’s a musical (staring Johnny Depp 🙂 ) about a murderous barber in London. While this is a fictitious tale for London, there was actually a barber who murdered people and sold their bodies to be used to make pâté here in Paris. He was actually executed on the same spot that the Christmas tree now stands in front of Notre Dame…pleasant…

The Pont Neuf (aka New Bridge) is actually the oldest bridge still standing in Paris. Today we learned a fun story about it. The Pont Neuf was the first stone bridge built here and was developed because the collapse of old wooden bridges was becoming more common. However, in the minds of the medieval people: stone was heavier than wood, so wasn’t this bridge more likely to fall? This way of thinking kept people from using the bridge. The disinclination became so bad that the king devised a plan. He invited all of the noblemen (who were like the celebrities of this time) to a giant party at his palace. He supplied so much alcohol that everyone was drunk as a skunk in no time flat. Once intoxicated the nobles had to sit while a caricature was drawn. Each of these pictures was turned into a stone face and the faces were placed on & around the new bridge. When the peasants heard of the carvings they flocked to the bridge to see them, crossing it in the process…this proved to them it could stand and the bridge soon became the busiest of the city.

Taken into one of the centre courtyards of the Louvre our guide pointed out the colored stickers on some of the windows. Interestingly, the museum contains so many priceless and irreplaceable pieces of art that there are only a select few windows the fire department can break open in case of a fire without damaging one of these pieces.

When we reached the Champs Élysées on our tour we were greeted with two magical sights.

The ferris wheel at the start of the Champs Élysées was originally permanent but the people of Paris were not fans. Instead, the ferris wheel was taken down and is now only put up for the Christmas months. The market lining the first part of the street is also a holiday tradition. When our tour finished we returned to the Champs Élysées Christmas market. It was by far the best market we’ve seen yet. It spanded 5 full city blocks, on both sides of the road, and featured a wide variety of booths. It was nice to see things other than pieces for nativity scenes (which is what dominated our previous markets). There were a lot of food stalls (ranging from hot dogs to waffles to crepes to hot wine) and plenty of jewelry and winter wear vendors. We perused the merchandise while munching on delicious sausage on baguette hotdogs. We may have crossed a Christmas present or two off our list in the process 😉

Making our way back towards Notre Dame, we hit the shops. There is no shortage of tourists stores in Paris and we visited most of them. We also went in some actual stores, including many down Rue de Rivoli (which runs beside the Louvre). We went for supper as a way to escape the rain. It had been spitting on and off throughout the day but it had reached a new level. It was pouring so we ducked into a place for fondue! fondue! fondue! We are sure you can all imagine the deliciousness that followed 🙂 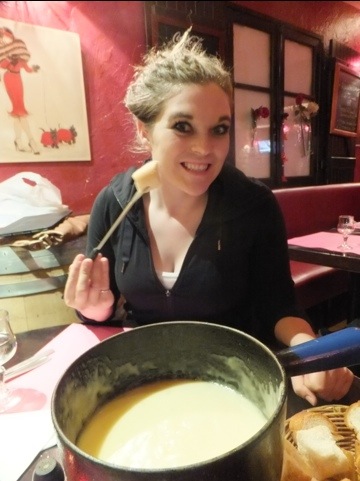 By the time we’d finished eating the rain had stopped. It was miraculous! When we’d first sat down we had very low hopes for getting anything done this evening, but the weather gods were smiling on us. We walked all the way back to the Champs Élysées and proceeded to make the 2+ km trek down to Arc de Triumphe and then the 2+ km trek back. Everything was wonderfully lit, so it made for a pleasant stroll. 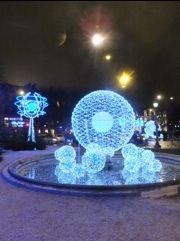 And because our day of constant walking wasn’t enough, we walked to the Eiffel Tower. This final stretch made today one of our “most walked” days of the trip. We made it there with plenty of time to wander around and visit the gift shop before the next sparkling. Fun Fact: The twinkling lights that go off every hour after the tower is lit up at night were originally an art installation put on to celebrate the turning of the millennium. They were meant to stay up for only one year, but people loved them so much that 11 years later they are still sparkling each night. But because they are an “art installation” the artist still gets a royalties cheque every time the lights go off…that’s a cheque for every hour after dark every day for the last 11 years…that’s a lot of cheques! Also because of the art title it is actually illegal to take a photo of the tower while it is sparkling (such as the one below). It would be considered ‘stealing someone else’s art’. This is obviously a law that the police would never enforce…can you imagine chasing down every tourist and asking to see their cameras?

Another fun fact is that we thought the Eiffel Tower may blow right over! The wind was super intense…intense enough that we watched a bird flapping with all of his might but remaining stationary because he couldn’t overpower it. The poor bird was hilarious to watch. As a bit of relief (and because we dont actually know the way on foot), we took the metro home to our hostel. We’d like to classify our first day of our second Paris trip as a success! 🙂

What We Missed:
Our Ugg boots…they’re just so comfy & warm!

Why don’t you start out with: