Doug here! And here is: Ireland! How exciting!

I began my journey in Belfast, which is in Northern Ireland. Northern Ireland is part of the United Kingdom and therefore still uses the Pound for currency. It is a very nice city with feeling of people aware & proud of their history and yet still excited & working to move forward.

One of Belfast claims to fame is that both the Titanic and it’s sister ship the Olympic were built there way back in 1911-1912. I went on a tour to see the slipways where the ships were built (a very long concrete area they could setup scaffolding on) and the dry dock where the Titanic was finished (a very large hole that can be emptied or filled with water from the river).

My favorite part though were the Drawing Offices, where the plans of the ship had actually been made. Men had stood all day, 6 days a week, on this room drawing blue print after blue print by hand. I stumbled across a drawer that contained many of these actual drawings as I explore the exhibits in the room. I was in the middle of examining them when the tour guide noticed and shouted in alarm. It seems these were records they previously hadn’t been able to find! Looking at the plans it was obvious where the errors had been made that caused the epic failure of the Titanic, causing it to be not only the most famous sunken ship of all time but the most famous ship period! I pointed these out to the guide, who merely stared at me like I might be a crazy person…I most certainly am not! I just solved the mystery of the Titanic! 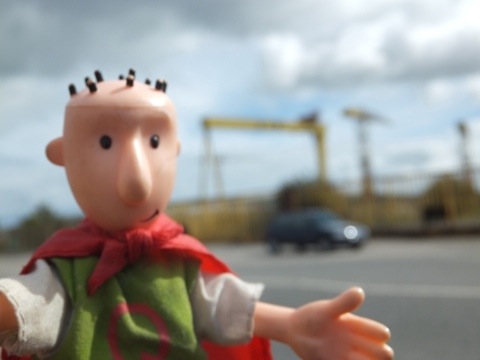 Those are the Harland & Wolfe cranes…I’ll need to email them about my discoveries.

As I was leaving the exhibit, having fixed ship building forever, I came across a crazy sight. The were just beginning some sort of event with large dumbbells, stones and men in tight wrestling type outfits. Naturally I had to ask what it was…an amateur strong man competition! Intrigued I started asking more questions about the events and competitors until it came out that there was going to be a delay because they were one man short. There was such a cold wind blowing up off the river that I worried about the crowd that had gathered to watch. So I did the only logical, kind thing: I volunteered to step in! I did not know what I was getting myself into at that point! All of the things I had to lift was so heavy and you had to do so many repetitions! Needless to say I did not win…however they did tell me I was the strongest man of my size they had ever met!

Ready to leave the mayhem of Belfast I went on down to Wicklow county. Wicklow is an area right on the east coast with small mountains surrounding it. Why, you might ask, would I choose to head out to the middle of nowhere when I’m usually up to such crazy things in such exciting places? Simple, I had a crazy exciting thing to do there! It seems my reputation already precedes me…I was offered a small part in a movie being filmed there! The small towns and large estates of Wicklow county have developed quite a resume in the film industry. They’ve been used in countless movies and TV shows to depict a wide variety of different countries and time periods.

I’m not allowed to disclose much for details on the project but I will tell you this: it will be big (I got to meet another few big names!), it is a period piece based (back in the past), and I did get to carry a sword. To sum it up in a word, it will be awesome!
In the end though I also enjoyed the country charm I found in Wicklow town. It was a nice break from the hustle & bustle of my travel adventures!

The other main city of the Irish island is Dublin. Dublin is not in Northern Ireland. It is located in the Republic of Ireland, which is not part of the United Kingdom. It instead associates itself with the European Union (EU) and therefore uses the Euro for money. It was interesting to see the subtle differences between the North and the rest of Ireland.
The main sight in Dublin is the Guinness Brewery & Storehouse. It was opened in 1759 by a man named Arthur Guinness who was so confident he would succeed that he signed a 9000 year lease on the property! I was very curious about how beer is made as I had no previous knowledge on the subject. I was reading each exhibit carefully when I literally ran into a gentleman. After apologizing profusely I found out he is actually a Guinness master brewer! He took me on a tour of the brewery and taught me a lot of tricks about making my own beer. Maybe I’ll have to try that when I get home! Here’s a photo of me with a Doug-sized pint of Ireland’s favorite beer:

That’s all from Ireland…next will be an exciting tour through jolly old England! I just can’t wait!

This morning began with a nice walk to the train station. It wasn’t far but it was uphill so it was good hard work for us! Beans foot is feeling a lot better (which was good for the day ahead!). We passed a lot of kids on uniform on their way to school…elementary kids, middle school kids and high school kids. We entertained ourselves by examining and comparing the uniforms of the 3 different schools. The elementary ones were the cutest (all grey & white) but the middle school ones were also cute (with navy, grey & white). The high school ones had ugly skirts and didn’t match. (We would like to take this opportunity to wish our peeps at home good luck with school…the Neustaeters and Kels!) At the train station we met 2 very nice old ladies who we chatted with until our train came. They were very curious about our trip and about Canada. Kristin told them she’d mention them in our blog.

Instead of heading straight to Dublin we got off the train in Bray. This is a town a little bigger than Wicklow Town, but still in Wicklow County. We walked through the center of town and then out to Killruddery Estate just outside of town. This was a bit of a hike with our bags on but there hadn’t been anywhere to store them at the small town station.

The Killruddery Estate and Gardens has been the home of the Earls of Meath since 1618. The current estate dates from 1820. The house was lovely…from the outside…we didn’t pay to go in. The gardens themselves were wonderful though. 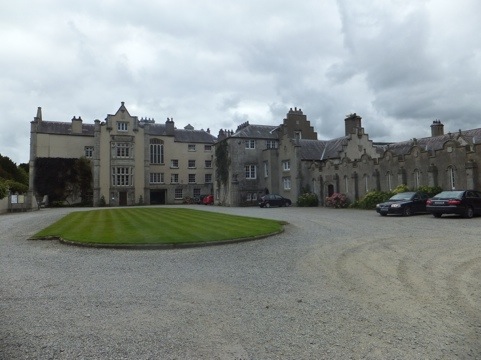 We had a little snack sitting on the old Victorian tennis greens and then used our map to wander the gardens. The main reason we wished to visit Killruddery in the first place was it’s film credits. Many scenes from The Tudors and Camelot were filmed here. Makes sense as it has everything you would need for filming: rocky area, wooded area, wilderness area, farmland and a beautifully manicured garden. There were even a few locations we think we might remember scenes from!

The walk back into town somehow seemed harder, even though it was downhill, but we made it 🙂 We were able to catch a train to Dublin almost immediately. When we arrived Kristin was confused why the station looked soooo much like one we had been in before…until she realized we had been in this station on our way to Wicklow…not her finest moment! The hostel was only a couple of blocks away, which was nice after our earlier hike. This hostel seems quite big (aka lots of rooms). We’re in a 6 bed room again (this is going to be the norm for us we think).

Once organized in our new room we caught the tram that ran past the station. This is an above ground rail line kind of like the LRT but just seems lamer. It drives on the road for most of it, so still needs to stop for lights, and often is only going a walking speed. Weird…and lame…but got us where we were going for cheap!

Our destination was the Guinness Storehouse, which is attached to the original brewery that Arthur Guinness opened in 1759 when he signed a 9000 year lease on the building.

We learned a lot about how beer is made, such as what hops are…did you know they have little cabbage like crowns? We also learned about other random things like barrel making, shipping barges and advertising. The tour featured a tasting…here is Justine’s reaction to her first taste of Guinness:

We also got a free pint at the very cool round glass bar at the very top of the storehouse. It was about 8 stories up and gave a wonderful 360 degree view of the city. When we left this is the state of our free pints:

Can you guess who’s is who’s?

We then wandered about and tried to take in as much of Dublin as we could in our limited time. We saw almost the whole of the Medieval/Viking District (sounds like a hoot doesn’t it?), which is the main sights/tourist area. We made sure to check out both Christ Church Cathedral and St Patrick’s Cathedral. Both are very big, very impressive churches! We then took the tram back to our original station and went to a restaurant we had scoped out earlier for supper. Justine had a delicious Shepard’s Pie with chips and Kristin went back to eating Bangers and Mash (she would like to have this for every meal she has left in the UK/Ireland).

What we Learned Today:
– The Guinness Book of World Records is made by Guinness…like Guinness Beer…like that we went to today… It was first created as a means to settle arguments in the bars! (Wikipedia also tells us that is also the most stolen book from libraries in the US)
– We want Kraft Dinner… 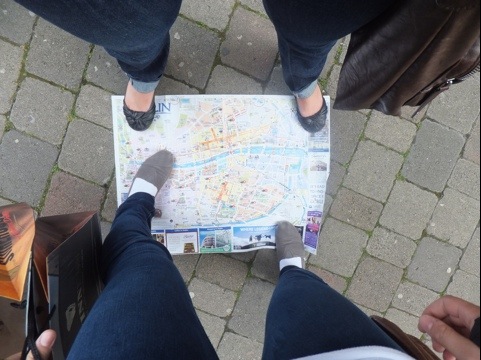 And as an extra fun bonus, here is Kristin struggling because it was windy and therefore getting the map down to get into was difficult…

Why don’t you start out with: